E.L. James needs to shut her ignorant mouth about abuse.

Dear Readers:
Since I've started on the long (the very, very, very long) journey of blogging about 50 Shades and why the relationship at its core is a predatory, abusive one between an aggressive stalker and his victim, a lot of women have come to me and said, "this is just like the abusive relationship I was in," or "this reminds me of the ex who tried to stab me in the throat with a screwdriver." I'm beyond horrified at the number of emails and comments I've received from women who have had their own "Christian Grey" and managed to escape him. This shouldn't be happening as often as it does, and the only reason it does is because our culture tells us that as women, we need to be first and foremost available for male attention - and to not make ourselves so is to be rude and not a very nice woman.
So, when Emma sent me a link with E.L. running her ignorant mouth about allegations of abuse in her books, I lost my fucking mind:

James says she "freaks out when she hears people say that her book encourages domestic violence. "Nothing freaks me out more than people who say this is about domestic abuse," she says. "Bringing up my book in this context trivializes the issues, doing women who actually go through it a huge disservice. It also demonizes loads of women who enjoy this lifestyle, and ignores the many, many women who tell me they've found the books sexually empowering."

One would think that since she has at minimum a third-grade understanding of the English language, E.L. James would be able to understand a few core concepts.
So, there you go. E.L. James cares so much about you, abuse survivors, that she's willing to prioritize a woman's right to be spanked over your right to not be stalked, intimidated, beaten, and controlled. She cares so much, that she won't even listen to you when you try to tell her what's wrong. And she's so, so terribly concerned about you that she doesn't want anyone to even talk about the abuse in her books or the potential for abuse in a BDSM relationship... because she doesn't want to upset you, and she knows best. Or something. I don't know, I'm honestly considering the possibility that this woman is gluing up before her public appearances. 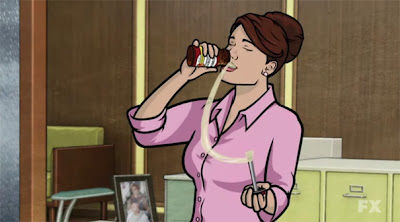 Is E.L. James the real-life inspiration for Cheryl Tunt?
The bottom line is, this is a problem E.L. James could fix, easily. First of all, she has to drop this whole, "I want to protect abused women" bullshit line that is clearly not true at all. And she has to stop touting her books as some kind of sexual saving grace that women are learning and growing from. Then, when someone says, "Hey, Christian Grey is an abuser," she can say, "You're right. The relationship portrayed in my books is not a healthy one. However, as a fiction writer I am telling a story, not writing a how-to manual. If my books are encouraging women to be more open in their sexuality, I think that's great, but I would advise them to seek out other, nonfiction resources for instruction in the BDSM lifestyle. And I would ask them not to hold up the relationship between Christian Grey and Ana Steele as one to aspire to."
That's all she has to do. But she won't. Because at the end of the day, women, E.L. James doesn't give a shit about you, or your experiences. And she was only writing this for school, anyway, so OMG SHE DOESN'T CARE IF YOU LIKE IT!
(The link to the original story I took E.L.'s quote from is here, but be warned there are two auto-play videos of the same commercial badly out of sync at the top and bottom of the pages)
Posted by Jenny Trout at 8:44 AM

Say some stuff! If you can't think of anything to say, leave a link to a cute dog picture. I'm easy.

I love that my readers want to buy my books out of support/curiosity. Any books I have written will be under Jennifer Armintrout/Abigail Barnette/Jenny Trout. I have no other pen names, and books without those names on them were not written by me, even if the spelling is really, really close.

I suffer from depression, anxiety, OCD, OTD, and self-harm. Do you? Don't be embarrassed about it, okay? It's not your fault.
I find that when I'm down, I can stave off a total crash by listening to music. This is the music that helps me. Maybe it will help you, too. This is my "Get The @#$% Out Of Here, Depression!" playlist on Spotify.